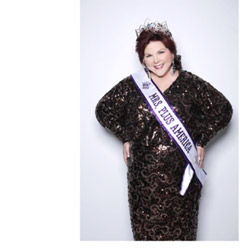 Constance Zehner, 60, a real estate developer, came to ESN Health with a goal to lose weight in order to compete in the 2013 Mrs. Plus America Pageant.

With hard work and dedication, Constance was able to lose:

After achieving her goal, Constance competed and won the 2013 Mrs. Plus America title. Now, Constance is striving to lose 10 more pounds and 10 more inches to compete in her next pageant.

ESN Health helped me…
“Prepare for the 2013 Mrs. Plus America pageant which I won! Thanks Ryan and all at ESN!”