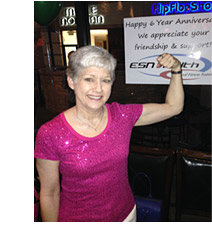 Janet McCormick has been a dedicated ESN Health client, since 2008.

She is now rocking her new body in this picture at our 6 year anniversary party.

Janet set a personal and meaningful goal to be ‘Fit by Fifty’ which allowed her to commit to a sustainable lifestyle change.

ESN Health helped me…
“Get fit sooner that I thought I could. They made sure I was exercising correctly & tailored the workouts to my needs. I was able to lose weight and develop muscle tone, without bulking up. In no time you will be doing exercises you never though you could!”