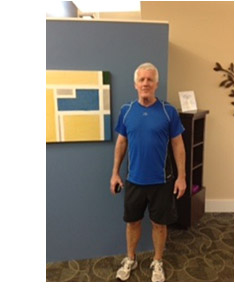 In Terry’s first five months at ESN he was able to reach a consistent pace of a sub 9-minute mile! With his mile time shortening, Terry was able to get his body fat percentage to just under 10%!

Since reaching his goals Terry reports that his waist size is what has changed the most. He is now down 3 belt sizes! Terry’s new benefit of his lifestyle is stamina and strength. His new goals really focus on strength training so he can get stronger.

To anyone considering ESN Health…
“Don’t worry about age. The ESN Health Staff will help you learn how to adapt and modify each workout to benefit you in the best way!”